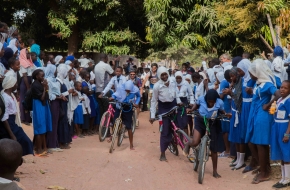 We woke up early again this morning to get an early start, because the mornings are so nice and cool, perfect mountain bike weather. At around 11AM The Gambia seems to have a heat switch that is instantly switched on, incredible. We all slept in large tents at the Berefet camp, which has a beautiful ponton from where you can dive in the Gambia river. That will be so nice when we get back from biking.

Today everyone had the choice between a 30, 50 or 60km ride around the region of Berefet. After a splendid 20km off road ride with lots of sand (which we all love now that we’ve accustomed to driving through it), our first stop was a school to which Czech Bikes for Gambian Schools has donated bicycles for the children who live in far away villages. This way they can come to school by bicycle and avoid the multiple-hour walk every morning and evening and make sure that they get a good education. b.foundation for Africa supports this project, which has already donated over 5000 bicycles to Gambian schools. Bicycles are not only important for children, but for the entire family it is an important aid.

We didn’t know what to expect at the school, but the welcome we received was just overwhelming: they formed a giant hague for us to ride through and they were all yelling “Welcome, welcome!” Of course they all wanted to sit on our bikes and ride them around the schoolyard. Their smiling faces and joyful attitude made our day. It is incredible how curious and happy they are, while still waiting so patiently to approach us.

One of the project leaders of the school told us about the evolution of the school and how the bicycles will be used, but most of us just couldn’t even get our attention away from the kids, talking to them, asking them about their lives. Whenever we take a picture of them and then show it on our cameras, they laugh embarrassed to see their faces in a photograph, and they say: “again, again.” After two minutes, 10 more children have joined in to get their picture taken. It is so nice to see why we participate to Bike For Africa. After the school stop some continued back to camp via the main road, while others did another off road loop of 30 or 40km. When everyone got back to camp, we all got together on the ponton and enjoyed the sun for a while, before heading for James Island, or better known as Kunta Kinte Island, a mythical slave from the book Roots. During the times of slavery, James Island was used as a prison for up to 500 slaves, before they were shipped off to the New World. The island is tiny because of erosion, but used to be bigger. There are only a few ruins left of the buildings, but the little cell that was used for the strongest black men who could possibly cause a rebellion, speaks for itself and breathes the history of this place. They were kept in that cell until they lost muscle and power, bereaved of food.

By the time we got back to the camp, a barbecue was waiting for us and we all talked about the things we experienced during the day. It’s safe to say that today was a great day.